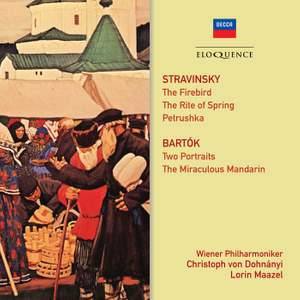 Appearance of the Firebird pursued by Ivan Tsarevich

Supplication of the Firebird

Game of the Princesses with the golden apples

Round dance of the Princesses

Dance of Kashchei's retinue under the spell of the Firebird

Infernal dance of all Kashchei's subject's

Stravinsky: The Rite of Spring: Adoration of the Earth

7b. Adoration of the Earth

Christoph von Dohnányi has long been considered one of the most versatile conductors of our time, making a name for himself in particular with the works of Romanticism and the Second Viennese School. From early in his career he established an excellent rapport with the Vienna Philharmonic Orchestra, and both in concert and on record drew from them playing of unusual transparency and clean attacks in music from Mendelssohn to Philip Glass.

This generous Eloquence anthology of four complete Decca LPs brings together the Vienna Philharmonic’s only Stravinsky recordings for Decca and finds Dohnányi on home turf, with ballets by his countryman Bartók and by Stravinsky that leap from the speakers thanks to both the conductor’s vivid characterisation and to first-class Decca analogue sound. Petrushka and The Miraculous Mandarin (complete with chorus) were taped in the Sofiensaal in 1977, with The Firebird following two years later. In the same 1979 sessions Dohnányi and the VPO also recorded the pair of Portraits which the young Bartók wrote while in love with the violinist Stefi Geyer: the solo part here is played with luscious tone by the native-Viennese violinist Erich Binder, then leader of both the VPO and the Bayreuth Festival Orchestra.

The Diaghilev trilogy is completed with Lorin Maazel’s 1974 VPO recording of The Rite of Spring, done in the grand manner and with the conductor’s typical attention to detail and fine balancing of inner parts.

‘refreshing and illuminating … blistering playing’ Limelight ‘Dohnányi’s direction of The Miraculous Mandarin … is clean, precise and often beautiful … The playing of the Vienna Philharmonic Orchestra is radiantly beautiful, helped by a spacious recording. Erich Binder is a first-class soloist in the Portraits.’ The New Penguin Stereo Record Guide

‘Dohnányi directs a genial and well-paced reading… revealing the Vienna Philharmonic as a band very sympathetic to repertoire not normally associated with it.’ The New Penguin Stereo Record Guide (Petrushka)

Dohnányi's opulent reading goes delightfully counter to the antiseptic dissections that have all too often come to pass for insightful performances; having chosen such an approach, he hardly could have done better than record with the Vienna Philharmonic. The orchestra plays beautifully, with particularly gorgeous contributions from the first oboe and horn in their ubiquitous solos.’ Fanfare, May/June 1981 (Firebird)

‘[In the Bartók] Dohnanyi doesn’t spare them a bit: the chase is one of the most exciting on disc, while the subsequent attack and attempted murder of the Mandarin (with terrifying organ sound) will make your hair stand on end … It’s a great performance, and so is the Petrushka … Sonically this stands among Decca’s best recordings from this source. A sensational reissue…’ ClassicsToday.com