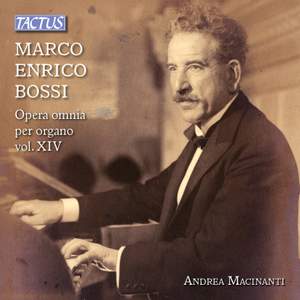 The Marco Enrico Bossi organ music Opera Omnia here continues with its fourteenth volume. This is still including transcriptions from various Italian authors of the Classical period like Azzolino della Ciaja, Baldassarre Galuppi and Padre Martini, and from composers from across the Alps like Gluck, Haydn, Liszt, and even Chopin and Schubert (the famous Funeral March, and two “Moments Musicaux” D 780). The amazing voice of the Carlo Vegezzi Bossi 1889 organ of the Lucera (Foggia) cathedral supplies to Andrea Macinanti a valuable media for performing the rendering of these amazing works. Andrea Macinanti studied at the conservatories of Bologna and Parma and then at the Klemens Schnorr in Munich. He is a member of the Accademia Filarmonica di Bologna and since 1988 has been the Artistic Director of the international concert review “Ancient organs, a heritage to listen to.”