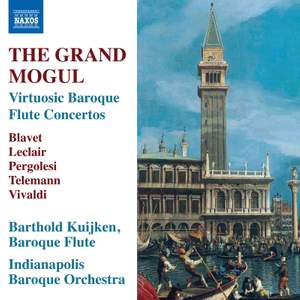 The new recording offers some very civilised music in very civilised performances to which I shall doubtless wish to return. — MusicWeb International, July 2019

Blavet: Flute Concerto in A minor

The solo concerto emerged in Northern Italy in the first quarter of the 18th century and rapidly became popular across Europe. The five works here demonstrate how concertos for the flute differ in Germany, Italy, and France. Outer movements usually retain the virtuosic elements that characterize the concertos of Vivaldi, but the Frenchman Michel Blavet infiltrates an exquisite Gavotte into his work, while Telemann’s superb melodies and rich harmonies are characteristic features of his Flute Concerto in D major. All five works exemplify the Baroque ideal of singing lyricism and passionate expression. Barthold Kuijken is an eminent leader in the field of early music. A virtuoso traverse soloist, teacher and conductor, he has shaped the fields of historical flutes and historically informed performance over the last 40 years. His book, The Notation is Not the Music, is an artful summary of his research, ideas, and reflections on music.