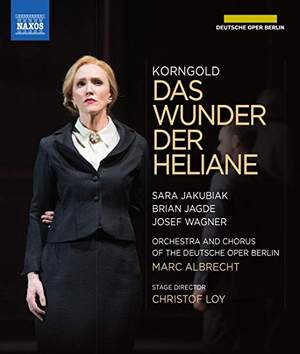 Marc Albrecht and his orchestra are familiar, so their excellence is no surprise. But the three lead singers are relative unknowns—and their stupendous performances leave you wondering why. [Sara... — Fanfare, January/February 2020 More…

Erich Wolfgang Korngold regarded Das Wunder der Heliane as his greatest work, but the opera has been neglected since its premiere in 1927. This 2018 production from the Deutsche Oper Berlin features the American soprano Sara Jakubiak as Heliane, and the American tenor Brian Jagde as The Stranger in the award-winning director Christof Loy’s acclaimed staging. The Orchestra and Chorus of the Deutsche Oper Berlin deliver the large forces required for this hyper-Romantic opera, under the baton of Dutch National Opera’s chief conductor Marc Albrecht. Bonus materials include a rare audio recording of the Interlude to Act III recorded in 1928.

Marc Albrecht and his orchestra are familiar, so their excellence is no surprise. But the three lead singers are relative unknowns—and their stupendous performances leave you wondering why. [Sara Jakubiak] She not only soars over the orchestra with both power and beauty of tone; she also, at the same time, captures the ambiguities of the character as well—her furious desire, her transcendent purity of spirit (if not of body).

Albrecht cheats us of none of the impact of Korngold’s scoring – and it is big – but paces the accompaniment to the drama tightly…No praise is too high for the three lead singers, who you feel must have been living in an oxygen tent to encompass so fully their parts over such a huge barrage of sound…Hugely recommended: an in-at-the-deepest-end introduction to Korngold’s art.

A truly ground-breaking achievement, a magnificent set which deserves every success.

Not only is this the first time the opera has been on video, it also happens to be an excellent production and performance...Jakubiak, a true singing actress, gives a go-for-broke performance in a role that seems tailored to her...Lovingly conducted by Marc Albrecht, who misses none of the Korngoldian lyricism nor the brutal, Elektra-style orchestral violence, this is a major and essential addition to the recorded Korngold legacy.

The performance is conducted with all the necessary full-blooded fervour by Marc Albrecht, and Korngold’s score emerges in all its richly chromatic, glittering tonality and overheated intensity.

[Loy’s] production is admittedly riveting, focusing closely on three main characters, and placing them in a simple panelled hall. Sara Jakubiak’s Heliane is stunning, her soprano and acting encompassing the role’s considerable demands of range, scale and emotion