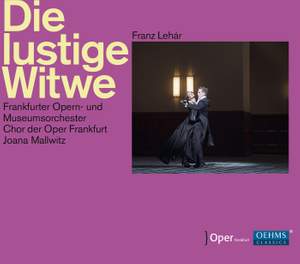 Although devoid of international stars, the cast is certainly bigger than the sum of its parts and delivers a lively, well-sung and -acted performance which brings the characters to life. The... — Fanfare, January/February 2020 More…

In May 2018 the premier of Franz Lehar’s The Merry Widow was a thundering success. It was not only Claus Guth’s sophisticated and insightful production that earned critical acclaim, the musical performance also received several accolades in its own right. The energetic conducting by Joana Mallwitz, Marlis Petersen in the title role, with Iurii Samoilov as Danilo by her side and Kateryna Kasper and Martin Mitterrutzner as Valencienne and Camille de Rosillon, the perfect couple, had audiences spellbound. The present release is a live recording of the phenomenal premier at Oper Frankfurt.

Although devoid of international stars, the cast is certainly bigger than the sum of its parts and delivers a lively, well-sung and -acted performance which brings the characters to life. The conductor, Joana Mallwitz, moves things along smartly but seldom sounds like she’s rushing things. Contrary to my expectations, the orchestra’s contribution is clearly recorded—in fact, I think the balance us nearly ideal … even superior to many studio recordings.

This is a perfectly enjoyable account, possibly closer in spirit to the piece’s light-footed, popular theatre roots than the more sumptuous classic recordings…While it’s not fair to the rest of the cast to say that [Petersen] carries the show, her soft-centred tone and graceful, light-touch phrasing certainly give this performance its heart.

A lot to admire here, in particular the singing of the leads.

There's no feeling of operetta on auto-pilot. Marlis Petersen's Hanna Glawari brings tongue-in-cheek poise to the party….[Danilo] is a notoriously awkward sing, but the young Ukrainian [Iurii Samoilov] clears the vocal hurdles easily…Kateryna Kasper's Valencienne, glinting with colour, is as alluring as any I've heard on disc…But the music's the thing: it has been 12 years since we had a brand-new Lustige Witwe on CD, and this beguiling ball deserves the warmest welcome.

The cast sings with delicious smoothness. Marlis Petersen is an elegant Hanna, the titular widow; Iurii Samoilov a pleasant Danilo; and Martin Mitterrutzner a polished Camille. But none of them sounds very sexy – strange considering how good-looking they all are. I’m guessing that the production brought a lot more to their performances. Only Kateryna Kasper’s Valencienne projects personality from the speakers.