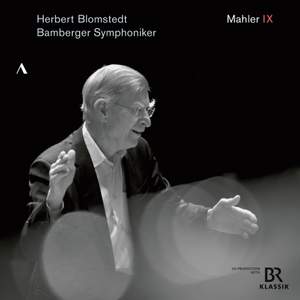 It is hard to find any weak link in the Bamberger Symphony Orchestra’s line-up, either in the more turbulent tuttis or in the chamber music-like episodes that so touchingly punctuate the outer... — BBC Music Magazine, September 2019 More…

For Gustav Mahler, composing his early symphonies meant "building a world”. His Ninth, however, seems more concerned with the deconstruction of this world – a look back, a long farewell. In the draft of his score, he noted words like "O youth! Vanished! O love! Blown away! ". In 1909, his idyllic world was destroyed, having been diagnosed with a heart valve defect two years earlier – a disease that would ultimately lead to his death. While his last completed symphony still contains some folksy elements, Mahler composed a heartbreaking Adagio as its Finale. Herbert Blomstedt, Honorary Conductor of the Bamberger Symphoniker, guides the orchestra through this rollercoaster of emotions, ranging between deep sadness, comfort and melancholia. This exceptional recording is the first album release with the Bamberger Symphoniker and their honorary conductor Herbert Blomstedt.

It is hard to find any weak link in the Bamberger Symphony Orchestra’s line-up, either in the more turbulent tuttis or in the chamber music-like episodes that so touchingly punctuate the outer movements…If this is to be Blomstedt’s final take on this heart-rending work, it is a worthy one.

This distinguished performance is worthy of a place of honour in any Mahler collection.

the music sends chills down the listener’s spine and taps into Mahler’s rage as a frightening unleashing of human determination ... while ensuring that this is also the genuine first movement of a Symphony.

There’s plenty of zest in the fast middle movements, the Länder’s different tempi nicely differentiated and ending with a very droll pay off (horns and contrabassoon acquitting themselves brilliantly.