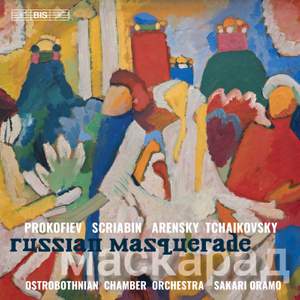 A mix of works for string orchestra and arrangements originally written for piano, delivered with a clean sound. The sound could be brighter and the attack more exciting, but it’s a pleasant... — BBC Music Magazine, October 2019, 3 out of 5 stars More…

Arensky: Variations on a Theme of Tchaikovsky, Op. 35a

Composed in Russia between 1884 and 1917, the four works appearing on this disc all do so in some kind of disguise. Prokofiev and Scriabin both conceived their respective collections for the piano, and it is later arrangers that have adapted them for string orchestra. Rudolf Barshai took on Prokofiev’s Visions Fugitives in 1962, selecting 15 of the 20 brief pieces and arranging them for his own ensemble, the Moscow Chamber Orchestra. Scriabin’s Preludes received a similar treatment in 1999 when the Finnish composer Jouni Kaipainen chose 13 from the original 24, rearranging the order they appear in and transposing them in some cases. As for Anton Arensky (1861—1909), he composed his set of variations as the third movement of a string quartet, taking the theme from a song by Tchaikovsky and letting it undergo a series of transformations. Cheered by the success of the piece, he made his own arrangement for larger forces, a version which remains one of his best-known works. Tchaikovsky’s Elegy, finally, is actually heard here as it was composed, in 1884, but the piece saw the light of day as ‘A Thankful Greeting’ and was renamed ‘Elegy’ only at the time of publication, before making a final reappearance, as part of the composer’s music to Hamlet. The four works are performed by the Ostrobothnian Chamber Orchestra, one of Finland’s finest ensembles, conducted by its artistic director Sakari Oramo.

A mix of works for string orchestra and arrangements originally written for piano, delivered with a clean sound. The sound could be brighter and the attack more exciting, but it’s a pleasant enough listen.

Oramo brings his architectural nous to Arensky’s Variations, originally a movement from his String Quartet No. 2…Tchaikovsky’s Elegy is a pleasing finisher but a slightly underwhelming one. For all its qualities, you might well have the same reaction to the disc as a whole.

played here by Sakario Oramo’s Ostrobothnian Chamber Orchestra, they’re quite brilliant... As with the Prokofiev, Oramo secures razor-sharp playing; this arrangement [No. 8] is a real find.