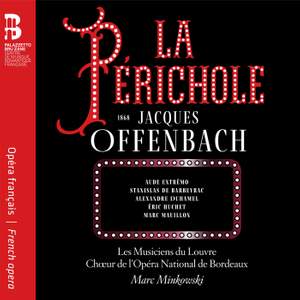 In the pit are Les Musiciens du Louvre – part of a growing and welcome trend towards giving operetta the benefits of historically informed practice. You can hear the results from the very first... — Gramophone Magazine, October 2019 More…

Recording of the Week,  Offenbach's La Périchole from Marc Minkowski

One of the composer’s great champions celebrates last week’s bicentenary in style with the first period-instrument recording of this 1868 opéra bouffe about a couple of down-at-heel street-performers who are coerced into a drunken sham marriage.

Offenbach’s La Périchole (1868) will never cease to delights music lovers of all persuasions. Marc Minkowski – long one of the composer’s prophets – was keen to pay tribute to him with this world premiere recording on period instruments, in the company of the young school of French singers, including the bewitching Aude Extrémo, the dashing Stanislas de Barbeyrac and the hilarious Alexandre Duhamel. Combining fashionable rhythms with the most unexpected touches of folklore, the score is a veritable flood of hit numbers. How can one not be swept away by the insolence of the Seguidilla, the frenzy of the Bolero or the furious rhythm of the Prison Trio? Never before, perhaps, had Offenbach gone so far in caricaturing political leaders – nor used drunkenness to resolve the imbroglio of inextricable sentimental relationships. And indeed, the ‘Tipsy Arietta’ is one of the composer's best-known numbers. Cheers!

Contents of the book

Waldemar Kamer, The Spanish amours of the Second Empire

In the pit are Les Musiciens du Louvre – part of a growing and welcome trend towards giving operetta the benefits of historically informed practice. You can hear the results from the very first bars: springy, lean, with the underlying dance rhythms (Minkowski favours brisk tempos) bouncing naturally up from the bass…the principals are very much inside their parts.

Les Musiciens du Louvre imbue Offenbach’s scoring with a tangy leanness emphasizing the luminosity, tenderness and slight bitterness…The all-French cast is led by the highly talented Aude Extrémo, possessor of a beautifully full, steady mezzo. But she makes a rather one-dimensional leading lady.

As with his earlier operetta recordings, Minkowski has a knack for casting luxury voices without over-egging Offenbach’s soufflé-light writing, and his two leading singers here combine adroit comic timing and lightness of touch with a richness of timbre that would grace La favorite (which La Périchole burlesques to some degree)...The balance between French and Hispanic elements is brilliantly judged throughout.

Although some of the dialogue may test non-Francophones, the performance is so idiomatic, and dashed off with such brio by his orchestra, the chorus and outstanding soloists — Aude Extrémo, in the title role, bears comparison with the great Régine Crespin’s wit and sensuality — that one is quickly drawn in.

Pleasures stack up...Minkowski’s handling might not be quite as rhythmically sparky as Igor Markevitch’s in 1959, but he knows about dramatic pacing and makes the most of the score’s inventive orchestrations. And it’s Offenbach who remains the show’s true star. Winning melodies, lively Spanish colouring, grace and wit even when characters turn boorish — really, what’s not to love?