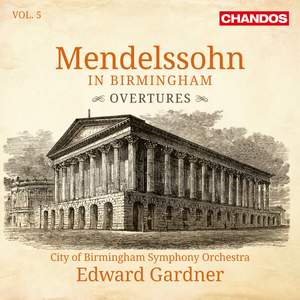 The most striking feature of these performances is their remarkable clarity of texture which even in the more forceful passages enables us to hear every strand of Mendelssohn’s incredibly resourceful... — BBC Music Magazine, September 2019, (Performance) / (Recording) More…

Edward Gardner’s Mendelssohn in Birmingham series continues with a recording of Overtures. As with the previous volumes, a reduced size CBSO join Gardner in Birmingham Town’s Hall, where Mendelssohn himself conducted many of the UK premieres of his own orchestral works. The majority of works in the programme were written as concert overtures, spanning the length of Mendelssohn’s career from the early Midsummer Night’s Dream composed when he was just 16 though to ‘Ruy Blas’ written towards the end of his lifetime. Two of these overtures were written as the opening movements of larger works: ‘St Paul’, his first great Oratorio from 1836, and his overture to ‘Athalie’, incidental music written for Racine’s play. The Trumpet Overture is the earliest work here, written possibly to precede a performance of Handel’s Israel in Egypt, and allegedly Mendelssohn’s father’s favourite piece!

The most striking feature of these performances is their remarkable clarity of texture which even in the more forceful passages enables us to hear every strand of Mendelssohn’s incredibly resourceful orchestration. Indeed there’s a fluidity and vividness to Gardner’s interpretations which is fully supported by the superbly responsive playing from the CBSO.

The performances, as one might expect, are for the most part exemplary. Gardner is often keenly alert to both the emotional tone and innovations in sonority and structure of each work.