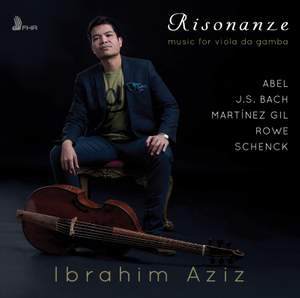 ”Risonanze” is the debut solo album of London-based viola da gamba player Ibrahim Aziz. Aziz is considered to be one of the greatest performers of the instrument of his generation. This recording is a performance of immense expression, expertly delivered on a viol made by English string maker Barak Norman in 1712 and which features the premiere recordings of three works.

The album includes one of the highlights of the baroque era, the Cello Sonata No. 2 by J.S. Bach as well as other baroque works by Carl Friedrich Abel and Johan Schenck. “Risonanze” also includes contemporary works, including onespecially written for Aziz, “Journeying” by Rebecca Rowe, along with the Summer Suite by Carlos Martinez Gil.

Popular between the 15th-18th centuries, the viol has a unique quality of the sound through plangent tones of its middle voice, silvery and vibrant high notes, and the depth of its bass and human-like qualities. Its bow is played with a technique that discourages sharp attacks on the strings, but instead draws out and threads together each note. This quality of sound is not volume but resonance.

Ibrahim Aziz was born in Kuala Lumpur, Malaysia and has worked and travelled around the world with his viola da gamba. An award-winning student in London (he won the Trinity College of Music’s prestigious Gold Medal in 2005, being the first to do so on a period instrument, and was a finalist in the International Bach-Abel competition in Kothen a few years later), Aziz has since collaborated and performed with many distinguished personalities such as soprano Dame Emma Kirkby, harpsichordist Mahan Esfahani and natural historian Sir David Attenborough. He has formed various period instrument groups and, as a member of the Chelys Consort of Viols, the Stanesby Players, the London Abel Quartet and the Rose Consort of Viols, has appeared on numerous highly-acclaimed broadcasts and recordings.