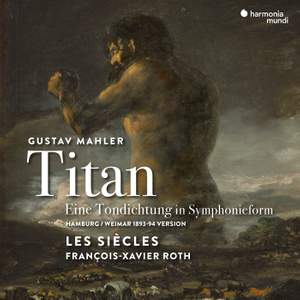 The biggest surprises of Mahler’s second, 1893 version of his first symphonic masterpiece…are the touches of orchestration later changed, usually for the better…Roth’s punchiness is probably... — BBC Music Magazine, August 2019, 4 out of 5 stars (Performance) / 3 out of 5 stars (Recording) More…

François-Xavier Roth and his period-instrument orchestra perform Mahler's "tone poem in the form of a symphony in two parts and five movements", an early version of his First Symphony.

Gustav Mahler was not yet thirty years old when he mounted the podium to conduct his ‘Symphonic Poem’ (Sinfonische Dichtung) in the Large Hall of the Redoute (Vigadó) in Budapest on 20 November 1889. The young man, who had recently been appointed director of the Hungarian capital’s opera house, was presenting an orchestral composition for the first time that evening. This work, which Mahler thought would be ‘child’s play’, was in fact - as he was to admit years later - “one of [his] boldest.” It is the crystallisation of his childhood, marked by the successive deaths of his brothers and sisters but also by the brutality of his father. The work also embodies the dreams that this rebellious young student at the Vienna Conservatory had already forged some ten years earlier, with the new generation of artists and thinkers of which he was a member.

In this album, François-Xavier Roth and Les Siècles have chosen to present Mahler’s First Symphony in its second version, that of Hamburg/Weimar (1893-94) - a unique opportunity to hear the symphonic poem Titan. By allowing us to follow the genesis of this first large scale work, Titan opens the doors of Mahler’s artistic workshop at a crucial moment in the creative process: the transition from the youthful effort of 1889 to the Symphony in D major of 1896, which established Mahler as one of the foremost symphonists of the modern era.

The biggest surprises of Mahler’s second, 1893 version of his first symphonic masterpiece…are the touches of orchestration later changed, usually for the better…Roth’s punchiness is probably appropriate to the original; nothing drags.

The recording sticks a feather in the cap of Les Siècles, among the most adaptable and engaging of today’s historically informed ensembles formed in the image of their director… I applaud, too, Roth’s unabashed commitment to those passages where Mahler himself later had second thoughts – deft and ingenious ones, to be sure, but thinning out its red blood cells in the process.. a required supplement to any decent-size Mahler library.

If you're at all interested in orchestration then it's fascinating to be able to see the hundreds of tiny changes that Mahler made, and, in conjunction with this wonderful recording, to hear the impact that they make on the mood and emotion of the piece…The more incisive attack and articulation of the gut strings combined with the smaller bore of the brass instruments reveals one of this performance's major virtues: you can hear a wealth of detail in Mahler's string writing that often gets buried under loud brass chords.

The references to Beethoven, Brahms and Schumann in Mahler’s First only make it sound more revolutionary, and never more so than in this exhilarating account by Roth’s brilliant period-instrument band, whose woodwind and brass are playing on Austro-German instruments.