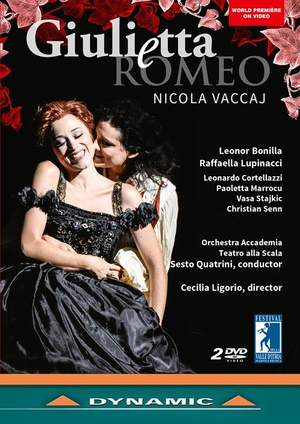 Vaccaj reveals himself as more than a journeyman composer. Even if the score suggests Rossini…Vaccaj’s version of the story does hold your attention…The cast is serviceable…However it’s Raffaella... — BBC Music Magazine, August 2019, 4 out of 5 stars More…

Nicola Vaccaj belonged to the Neapolitan School. He was a pupil of Paisiello and a contemporary of Rossini, whose fame somewhat obscured his own. But he was well enough known and appreciated during his day that an extract from the last Act of his Giulietta e Romeo was chosen as a substitute for the same aria in Bellini’s I Capuleti e I Montecchi for an 1832 performance. This arrangement remained common practice until the end of the 19th century. It’s hard to believe, therefore, that Vaccaj’s most notable success has been neglected for such a long time, since it is “an opera that could easily hold its own among the better-known works in the bel canto canon. It has a taut plot, with a strong libretto written by Romani, and is full of well-constructed ensemble pieces.” (Operawire)

Vaccaj reveals himself as more than a journeyman composer. Even if the score suggests Rossini…Vaccaj’s version of the story does hold your attention…The cast is serviceable…However it’s Raffaella Lupinacci, an up-and-coming Italian mezzo, who steals the singing and the acting honours. Her ripe tone and an elegant legato make her every inch the divided hero of this story. Sesto Quadrini is the highly sympathetic conductor.

Raffaella Lupinacci's characterful, fruity mezzo is matched by detailed and lively acting, and Leonor Bonilla brings a bright, elegant soprano and oodles of charm to Giulietta. I defy anyone not to find their tomb scene deeply moving - down as much to their excellent performances as to Vaccaj's score.

While lacking [Bellini’s] indisputable melodic genius and dramatic drive, Vaccaj’s setting proves worthwhile on its own terms. The cast is largely up to its challenges…Secure and exciting in her command of the writing. [Lupinacci] offers strong presence and a high degree of vocal definition…Leonor Bonilla is a Giulietta of equivalent quality, the pair’s voices blending perfectly.

Sesto Quatrini’s conducting is supportive and the cast good. The two young leads are outstanding, Raffaella Lupinacci a fervent Romeo, and Leonor Bonilla – a Giulietta reminiscent of the young Ileana Cotrubas, with her dark eyes and fresh and pliant soprano.