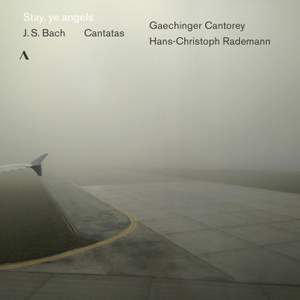 Make no mistake, there’s much to savour. The choir is incisive and alert; the instrumental playing, deft. But things don’t gel consistently, and it’s a pity texts and translations are omitted. — BBC Music Magazine, August 2019, 3 out of 5 stars More…

Two cantatas written by Johann Sebastian Bach for Michaelmas in 1726 and 1728/29 respectively build the framework of this recording. They tell of the Archangel Michael‘s victory over Satan. At the center of the cantata 'Es erhub sich ein Streit' is the tenor aria 'Bleibt, ihr Engel' (Stay, ye angels), which gives this recording its name.

Embedded in these two magnificent, dramatic works with timpani and trumpets are two more intimate cantatas that sing the song of peace. In the introductory Sinfonia and the two alto arias of 'Gott soll allein mein Herze haben', the organ is highlighted as a virtuoso solo instrument - perfect for the Hildebrandt organ in the Naumburg Wenceslas Church, which lends a special color to this recording. The final chorale contains a message that can also be found in the subsequent solo cantata 'Friede sei mit Dir and can be regarded as a statement of the entire program: 'So that we love one another from our hearts and remain with one mind in peace'.

Recorded at the Stadtkirche Sankt Wenzel, Naumburg, in September 2018, in co-production with Deutschlandfunk Kultur.

Make no mistake, there’s much to savour. The choir is incisive and alert; the instrumental playing, deft. But things don’t gel consistently, and it’s a pity texts and translations are omitted.

The orchestra and choir of Gaechinger Cantoery are conducted expertly by Hans-Christoph Rademann; ebullient trumpet-laden choruses fizz with a compound of sonorous muscle, rhythmic flair and contrapuntal transparency, nowhere more so than the convivial opening chorus of No. 149 (parodied from the Hunt Cantata).

It would be hard to fault Peter Harvey’s singing on Accentus.