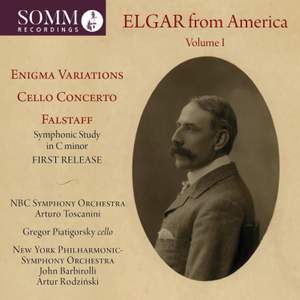 There are several live versions of Toscanini conducting Elgar’s Enigma Variations, but in Elgar from America his 1949 performance has the benefit of Lani Spahr’s expert sound restoration, making... — BBC Music Magazine, October 2019, More…

I Falstaff and Prince Henry

IV King Henry's progress - The repudiation of Flastaff, and his death

SOMM RECORDINGS is delighted to announce the release of Elgar from America, Volume I featuring historic recordings by a legendary cellist, two American orchestras and a trio of the 20th century’s greatest conductors. The results offer a fascinating transatlantic perspective on a titan of British music and includes two masterpieces and a symphonic study which Elgar considered his best orchestral piece. Elgar visited America annually from 1905-07 and again in 1911 where his music found articulate champions and a place in the country’s affections, the trio of his Pomp and Circumstance March in D an essential, long-established part of ceremonies accompanying America’s graduation tradition. The featured recordings date from the 1940s and have been restored and remastered by the multi-award-winning audio restoration engineer Lani Spahr, who also provides informative booklet notes.

There are several live versions of Toscanini conducting Elgar’s Enigma Variations, but in Elgar from America his 1949 performance has the benefit of Lani Spahr’s expert sound restoration, making NBC’s Studio 8H sound half decent. It’s full of affectionate phrasing, although sometimes brisk.

This particular Toscanini performance of ‘Enigma’ is new to CD and Rodzinski’s Falstaff has never been issued commercially in any format. It’s also healthy and stimulating to hear performances from outside the English performing tradition.

Toscanini’s 1949 live Enigma is the star — several minutes shorter than usual, but played complete (although the timpanist misses the little tattoo in Variation 2) and with a brilliance unencumbered by tradition.