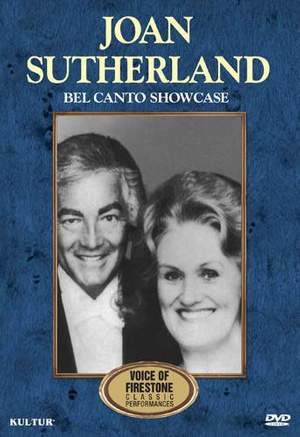 For more than thirty years, The Voice of Firestone brought the world’s greatest artists into the homes of music lovers. Now, through a special arrangement with New England Conservatory in Boston, Kultur is proud to make these rare telecasts available.

Since her ascension to world fame in 1959, Dame Joan Sutherland reigned supreme in the demanding soprano roles of the bel canto repertoire. Her rich and mellow tone coupled with an astounding range and flexibility qualify Sutherland as a true vocal phenomenon. Her one appearance on the Voice of Firestone took place on April 21, 1963, in the wake of her Metropolitan debut as Lucia, in 1961 and the famed La Scala revival of Meyerbeer’s Les Huguenots in 1962. This program, captured in the glow of those early triumphs, is a testament to the artistry which has rightly earned Joan Sutherland legendary status.