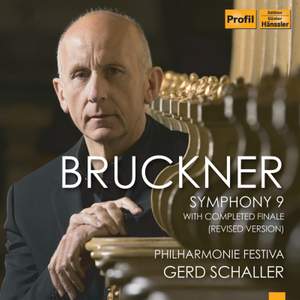 An exceptional performance which makes a compelling case for the conductor’s own revised completion of the Finale. — MusicWeb International, April 2019

Gerd Schaller writes of this new release: “Although extremely numerous and insightful, the surviving fragments of this movement, which were left at various stages of development, present a very incomplete picture of Bruckner’s Ninth. Nevertheless, throughout the decades in which I have theoretically and practically (as a conductor) studied Bruckner’s works, I have always found it regrettable that these fascinating sketches and ideas might never be played at all simply because they were not left in a playable form. Before I embarked on the task of filling in and completing the final movement, I did of course have to consider whether aspiring to finish such a masterpiece as Bruckner’s Ninth might be seen as somewhat presumptuous. A further exploration of the Ninth Symphony in the run-up to a performance is what eventually prompted me to assemble the final movement. Whilst it might be seen as presumption, I believed it to be altogether possible and even desirable to incorporate Bruckner’s incredibly daring and fascinating sketches and drafts into a playable and, most importantly, musically convincing form.“

An exceptional performance which makes a compelling case for the conductor’s own revised completion of the Finale.