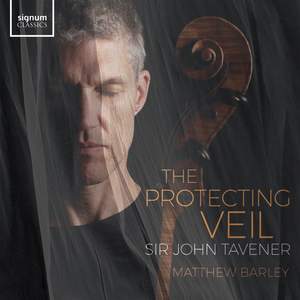 Barley’s playing [of The Protecting Veil] at first feels a touch too restrained, but as the piece progresses [his] restraint proves perfectly judged and a performance of great tenderness and... — BBC Music Magazine, August 2019, More…

William Butler Yeats: He Wishes for the Cloths of Heaven

I. The Protecting Veil

II. The Nativity of the Mother of God

V. The Lament of the Mother of God at the Cross

Pandit Sultan Khan: The Song of Separation and Waiting

The boundary-crossing British cellist talks to David about his new recording of John Tavener's vast, sweeping concertante work for the cello.

“Transcendent With Awesome Majesty.” John Tavener wrote these words above the opening cello notes of ‘The Protecting Veil’, immediately communicating the scale of this universal, timeless, structurally perfect and emotionally powerful work.

In the composer’s words “The cello represents The Mother of God and never stops singing.” Indeed, the cello sings without stopping for the entire 46 minutes of the piece, requiring huge mental and physical stamina.  Matthew Barley leads Sinfonietta Rīga in this exploration of Tavener’s musical works and inspirations, interspersing performances with readings of WB Yeats and Frithjof Schuon by renowned actors Julie Christie and Olwyn Fouéré. The influence Tavener drew from Indian music in ‘The Protecting Veil’ is also explored further in Barley’s performance with tabla player Sukhvinder ‘Pinky’ Singh in ‘The Song of Separation and

Matthew Barley is known internationally as a cellist, improviser, arranger, music animateur and as Artistic Director of Between The Notes. His musical world is focused on projects that connect people in different ways, blurring the boundaries that never really existed between genres and people.

Barley’s playing [of The Protecting Veil] at first feels a touch too restrained, but as the piece progresses [his] restraint proves perfectly judged and a performance of great tenderness and eloquence unfolds, well matched by the excellent Sinfonietta Riga.

[Protecting Veil] Yet the degree of intimacy that they bring to the performance is somehow less remarkable than the extent to which it doesn’t seriously diminish the work’s sense of size and scope. Although much of the music is relatively static—the long, slowly shifting chords that are part and parcel of Tavener’s uniquely individual brand of Minimalism—far more seems to be going on thanks to the simple fact that with the reduced performing forces we can hear everything much more clearly.

Barley directs the Sinfonietta Riga himself, from the cello, and the sense of complicity is very much a hallmark of this performance. [His] cello sings and the orchestra functions perfectly as the 'cosmic echo chamber' the composer desired. Even if you have other recordings of The Protecting Veil, I recommend this utterly beautiful and originally framed version unreservedly.