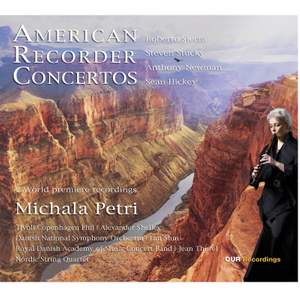 The late 17th and early 18th centuries were the Golden Age of the Recorder. Played by amateurs and professionals and admired by musical connoisseurs, the recorder was everywhere. From Italy to England, the greatest composers of the day were writing hundreds of masterworks to meet the public’s demand! Meanwhile, on the other side of the Atlantic, a scrappy group of colonists were carving a new nation out of the wilderness... But where were the recorders? It is one of the great ironies of the recorder’s long history that despite being ubiquitous in nearly every American public music school program, few composers ever explored writing for it. In order to set this egregious state of affairs to right, Michala Petri, the first Lady of the Recorder, invited four American composers to make their own discovery of just what an Old World Recorder can do! For the newest installment of her ground-breaking Concerto Project, four works have been specially commissioned to showcase the sound of the modern recorder.