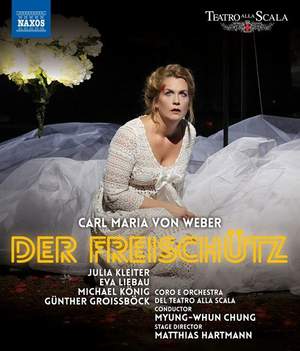 There are plenty of pyrotechnics here, and red demons writhing in the forest while Myung-Whun Chung fires up the La Scala orchestra…Groissböck is the star of the show, his muscular bass perfect... — Gramophone Magazine, June 2019 More…

Weber was at the forefront of the rise of German Romantic opera and sought to dethrone Rossini from his position as the leading operatic composer in Europe. In his breakthrough and most popular opera Der Freischütz (‘The Marksman’) composed in 1821, he succeeded in his aim of establishing a truly German form. Turning to the folklore and folk songs of his native land he took a story of a marksman who makes a pact with the Devil, vesting it with powerful intensity – not least in the famous Wolf’s Glen scene – and an astonishing control of orchestral colour and atmosphere.

There are plenty of pyrotechnics here, and red demons writhing in the forest while Myung-Whun Chung fires up the La Scala orchestra…Groissböck is the star of the show, his muscular bass perfect for the role of the tortured forester in league with the devil…Kleiter is a lovely Agathe…Chung conducts a clean account that has plenty of drama where it is required, while the villager scenes have bounce and charm. If only the production knew what it wanted.

By some margin the best opera film I’ve seen in 2019 so far.

It is very well conducted by Myung-Whun Chung…he remains a dynamic presence, pointing up the vitality and inventiveness of the score…König’s hefty Max offers a dramatically inflected lyrical strength, but he’s sometimes wide of the note and his acting values stem from the olden days…The two sopranos are well matched.