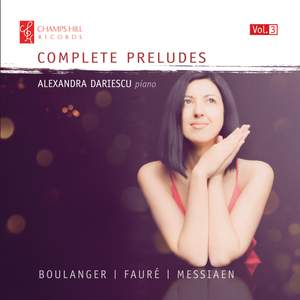 This is Alexandra Dariescu’s final release in the trilogy of Parisian preludes. Boulanger’s solo Prelude for Piano gives us a glimpse of what Lili might have gone on to write, had she lived beyond the age of 24. Fauré’s Preludes Op 103, published in 1910 are by comparison relatively late works but contain some of his most startling and original piano writing; which Aaron Copland referred to elegantly as 'intensity on a background of calm’. Finally on this recording, Messiaen gives each of his eight prelude a title, accompanied by a description often including the colours Messiaen experienced in this music through his synaesthesia, and reflecting his life-long love of birdsong.

A first-rate recital which combines a superb technique with a wonderful musicality.

The real discoveries on this disc are the eight preludes written by the 20-year-old Olivier Messiaen in 1928-9...their original language surely provides the key that links him back to Debussy and forward to Boulez.