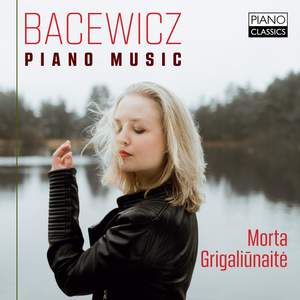 Grażyna Bacewicz (1909-1969) is one of the most significant composers of the mid-20th century, and yet her music remains largely unknown. In the period between the two world wars, she studied in Paris with Nadia Boulanger, like so many American, British, and Polish composers, but during her lifetime her reputation rarely translated itself into frequent performances outside her native Poland.

Bacewicz had a distinctive creative personality and an intuitive approach to form that rewards close study. Her experience as an orchestral leader and concert violinist informed and enriched the string writing in the string quartets, violin concertos and sonatas which have received some attention on record. However, distinguished pianists such as Krystian Zimerman have recently begun to make a persuasive case for Bacewicz’s piano writing, which may be appreciated at its freest and most demanding in the Second Piano Sonata which brings Morta Grigaliūnaitė’s recital to a thrilling close.

Bacewicz declared that she did not see herself as an innovator but as a progressive composer: ‘Each work completed today becomes the past yesterday.’ Her two sets of etudes tackle different techniques of pianism within clear, often ternary forms, but the imaginative ideas within them hint at her larger works in a similar way to the etudes and mazurkas of her compatriots Chopin and Szymanowski, highlighting her seemingly endless capacity for reinvention.

Morta Grigaliūnaitė also includes in her survey a series of lighter works: the Little Triptych, the Concert Krakowiak, a Children’s Suite and Trois pièces caractéristiques – most of them hardly more than a minute or two in length, yet all bursting with individual ideas which reveal Bacewicz’s own considerable talents as a pianist.

This album marks the debut on Piano Classics of a young Lithuanian pianist who has appeared throughout her own country and across Europe as a soloist since graduating from the Royal Academy of Music in London and completing her studies in Cologne and Madrid. Her recording makes a major contribution to the ever-growing appreciation of Bacewicz’s music.