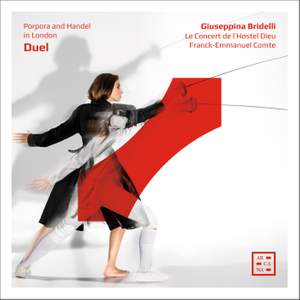 Despite the rivalry between the operatic companies leaded by Haendel and Porpora in London (1734-1737), much has to be said about the real nature of the connection between the two composers. Both the musicians were considered outstandingly original for their aesthetic choices. Both admired each other's music. The few whirlwind years of their defiance in Great Britain produced memorable scores: among them, Ariodante by Haendel and Polifemo by Porpora, performed with simultaneous runs in the city theaters. The fight between the two operatic company was an opportunity for the composers to meet and discover each other, to deal with the taste of the audience and to experiment new ideas, getting strength from the incredible skills of the members of the vocal casts (Farinelli, Senesino, Carestini, etc.). This CD tries to capture the soul of such a complicated intellectual relationship, presenting significant exemples of the composers' style and outlining the borders of the mutual esteem between two giants in the history of music.

On her debut solo album, the young talented mezzosoprano Giuseppina Bridelli performs with effortless bravery the difficult pages written for some of the most famous singers of the 18th century: between them, a version with original variations of Haendel Scherza infida

Ariodante’s heartbroken ‘Scherza infida’ is played and conducted as beautifully as any other performance I can remember; Bridelli eloquently sings anonymous 18th-century embellishments preserved in the Royal Academy of Music library…Harpsichordist Franck-Emmanuel Comte directs the Porpora selections with an affinity for detailed textures.

[Bridelli’s] well-focused mezzo has increasingly impressed for some years, but never as much as here. Her middle register has blossomed into honey-gold lustre, while the notes in the soprano range are full and largely well controlled, in the course of a magnificent ‘Scherza infida’…Bridelli’s singing of the aria is also notable for underlining her keen response to text…This is without a doubt a disc to be numbered among the very best Baroque opera recitals.