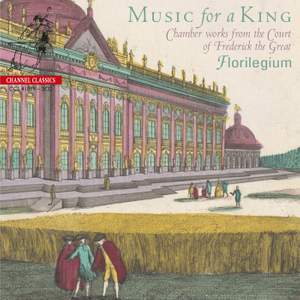 Music for a King

Chamber Works from the Court of Frederick the Great

This latest from Florilegium is such a musicological feast that it had threequarters won me over before I even pressed ‘play’…It’s the second disc where things get especially interesting, though.... — Gramophone Magazine, June 2019 More…

Muthel: Sonata in D Major for Flute and Continuo

Benda, Franz: Sonata in E Major for Violin and Continuo

Frederick the Great himself is known to have composed one hundred and twenty-one flute sonatas, four flute concertos, a symphony, various arias and an overture. These works were written in the mixed style advocated by Quantz in an attempt to blend Italian music of the senses with French music of reason.

The king’s love of music was real and genuine, and he desired and ensured that others should enjoy it in the same way. As a performer he was probably one of the most distinguished amateurs ever. As a composer he wrote nothing eminent or really original, though some pieces exuded a certain beauty and charm. However, this recording promotes the extraordinary talent of the musicians and composers he surrounded himself with at court, the luminaries of the 18th century, all brought together by one of the greatest musical patrons that ever lived.

This latest from Florilegium is such a musicological feast that it had threequarters won me over before I even pressed ‘play’…It’s the second disc where things get especially interesting, though. Take the sweetness and fluidity with which Čičić brings off the sonata by Benda… Or listen to the only flute sonata written by Müthel, who is interesting for being a composer who refused to compose on demand but only at the call of his inner muse.