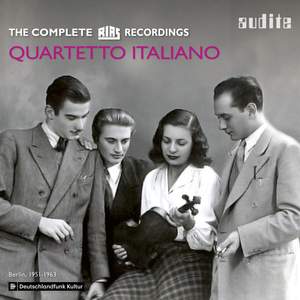 [In the Cherubini] the Quartetto Italiano achieve a seamless tonal blend…Ravel’s Quartet is given with an unusual degree of deliberation...Good sound clinches a terrific collection. — Gramophone Magazine, August 2019

The ensemble's confidently-chosen name made it clear from the outset that the Quartetto Italiano saw itself not simply as an Italian string quartet among many, but as the authoritative one. The ensemble was soon recognized as a pioneer of Italian chamber music culture following the Second World War. Through their tireless obsession with detail, in-depth exploration of the works' musical expression, and the remarkable homogeneity of their quartet sound, the Quartetto Italiano conquered a firm place in the top league of leading string quartets over the first two decades of their career.

The first release of the complete productions realized by the Quartetto Italiano for Berlin's RIAS between 1951 and 1963 highlights two aspects that the musicians would increasingly neglect in their later recordings: firstly, the focus on the music of their fellow countrymen, represented here in rarely-heard works by Gaetano Donizetti, Luigi Cherubini, and Gian Francesco Malipiero; and secondly, the enormous breadth of their repertoire, which ranged from Joseph Haydn, the father of the classical string quartet, to Dmitri Shostakovich's Seventh String Quartet (brand new at the time of the recording). Three works on this release (Cherubini, Donizetti, and Shostakovich) can be heard performed by the Quartetto Italiano for the first time on CD.

This release forms part of our series "Legendary Recordings" and bears the stamp "1" Master Release".

[In the Cherubini] the Quartetto Italiano achieve a seamless tonal blend…Ravel’s Quartet is given with an unusual degree of deliberation...Good sound clinches a terrific collection.