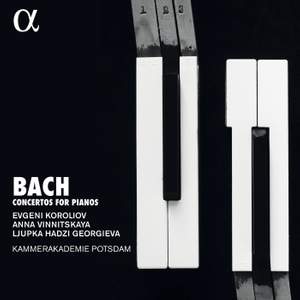 Those who want all of Bach’s multiple keyboard concertos on the piano cannot do better. Highly recommended. — Gramophone Magazine, July 2019

Over the past five years, pianist Anna Vinnitskaya has made three Alpha recordings dedicated to Shostakovitch, Brahms et Rachmaninov.

Evgeni Koroliov is a great master of the piano, a great Bach specialist, whose recordings of Bach are an acclaimed benchmark. His piano duo with his wife, Ljupka Hadzi-Georgieva, has made its mark over the past few years in all the major international concert venues. Also a highly reputed teacher, Koroliov was Anna Vinnitskaya’s professor at Hamburg.

‘Though I no longer study with him, I still meet and talk with him several times a week,’ she confides. ‘That helps me further in my development, not just as a pianist but as a human being…Now that I am myself a professor at the same university, I try to carry it on, to pass his experience on to others.’

These three Slavonic pianists, who for some time have been aiming to record the Bach concertos as a team, decided to invite a German ensemble that is itself highly expert in Bach interpretation, the Potsdam Chamber Orchestra; they recorded this double album in a legendary venue where some of the greatest artists have recorded: the Jesus-Christus-Kirche in Berlin.

Those who want all of Bach’s multiple keyboard concertos on the piano cannot do better. Highly recommended.