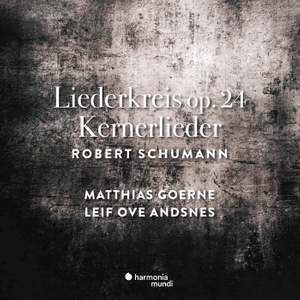 There’s hardly an abrupt, harsh moment throughout. But Heinrich Heine’s suffering-infused words need more risk, edge and ugliness…In other words – not revelatory or devastating, but beautifully... — BBC Music Magazine, August 2019, 4 out of 5 stars (Performance) / 5 out of 5 stars (Recording) More…

Recording of the Week,  Schumann from Matthias Goerne and Leif Ove Andsnes

The German bass-baritone brings near-Wagnerian intensity to Schumann's two great cycles of 1840, yet he and Andsnes are at their most spellbinding in the introspective songs.

In the miraculous year of 1840, which Schumann began in despair, forcibly separated from Clara by her father, he composed nearly 150 lieder, including the two outstanding cycles presented here, based respectively on poems by the great Heine (the Liederkreis op.24) and by Justinus Kerner (the twelve Kernerlieder op.35).

Haunted from beginning to end by Romantic Nature, in the hands of two such outstanding artists as Matthias Goerne and Leif Ove Andsnes these two masterpieces invite us, performers and listeners alike, to share a state of transcendence, a heightened consciousness that transports us directly to the heart of lived experience itself.

Where Heine can rail or sneer, Schumann, typically, dreams; and no Lieder-singer does reverie better than Matthias Goerne…A word, too, for Andsnes’s sensitive timing and shading of Schumann’s dreamy and/or quizzical postludes…Other baritone have brought more light and shade to [the Kerner-Lieder]. But if you respond to Goerne’s peculiarly intense, concentrated art, the rewards here are deep and enduring.

The past few years have brought several outstanding recordings of the latter cycle from lyric baritones, but Goerne’s darker, rougher-hewn instrument sheds an entirely different light on these songs of love, loss and exile...And though Goerne can be mightily impressive in declamatory mode, he still commands a matchless legato…Andsnes is noisily exuberant in the ‘Wanderer’ songs, gleefully aware that he’s never going to be in any danger of overwhelming this particular partner.

Both works here suit these artists’ musical sensibility and Goerne’s scrupulous articulation of the texts. His lyrical line in the hymnlike Schöne Wiege meiner Leiden and Andsnes’s cheery refrain in Erstes Grün show artists who are performing in complete harmony.

In the company of the elegant but incisive Leif Ove Andsnes, Goerne’s 51-year-old voice has changed. Darker hues impinging on the centre and around the edges of his still beautiful, burnished and flexible baritone suggest the increasing gravity of encroaching years. But there is also a markedly more controlled and meticulously measured modulation to the voice here, a quality that speaks of greater maturity and feeling for both music and text.