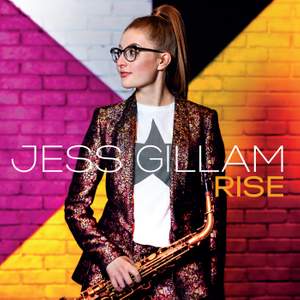 Bowie: Where are we now? (Arr. Harle)

The young saxophonist talks to Katherine about her debut solo album on Decca, released last week and including music by Dowland, Milhaud and David Bowie, plus a new commission by her teacher and producer John Harle.

Inspiring young classical saxophonist Jess Gillam presents her debut album ‘Rise’. It is a collection of pieces which showcase her phenomenal talent and diverse musical taste, ranging from Marcello and Shostakovich to David Bowie and Kate Bush.

Jess Gillam’s new album ‘Rise’ reflects her own musical journey and the pieces which have inspired her in her career. She recorded it with the BBC Concert Orchestra and chamber musicians, as well as celebrated guitarist MILOŠ, who features on the track ‘Flow My Tears’ – a transcription of the familiar Renaissance lute song by John Dowland.

The album includes beautiful cover versions of songs by two of Jess’s biggest heroes: Kate Bush’s ballad ‘This Woman’s Work’ and David Bowie’s timeless ‘Where Are We Now?’. There are also familiar hits from the world of film, such as ‘Closing In’ by John Williams (as featured in Steven Spielberg’s 2002 film Catch Me If You Can), Michael Nyman’s ‘If’ (from The Diary of Anne Frank) and the bonus track, Francis Lai’s ‘Theme from Love Story’.

The recording also features two of Jess’ signature pieces: ‘Pequeña Czarda’ by Pedro Iturralde, which she played in BBC Young Musician 2016 wind category final, and Darius Milhaud’s ‘Brazileira’ from Scaramouche, which she performed to great acclaim at the Last Night of the Proms – described by BBC News as the “indisputable highlight” of last year’s spectacular event at the Royal Albert Hall in London.

The range of repertoire enables her to explore a wide breadth of moods and atmospheres. Dancelike pieces… contain by-now trademark Gillam-isms – lively characterisation combined with technical brilliance… Harle has managed to grasp, harness and develop the multi-dimensional elements that have been innate to Gillam’s musical character since the very beginning.

The infectious Gillam is already everywhere, playing, recording, broadcasting, burning with passion for her instrument and classical music, plus music of any label or none...The fewer the instruments, the better the balance, the more natural the flow, as in the Dowland duet with the guitarist Milos, or intimate romps such as Milhaud’s Brazileira, where there’s room to hear your feet tapping. Yet whomever she’s with on this gaily coloured album, Gillam still spreads joy.