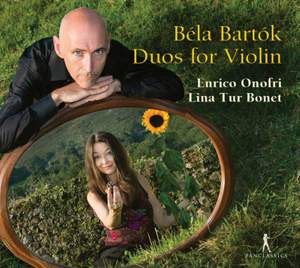 Béla Bartók wrote the 44 Duos for two violins in 1931. The original commission, by the German violinist and pedagogue Erich Doflein, was for an arrangement of Bartók’s piano collection ‘For Children’. Bartók decided instead to offer Doflein a brand new work.

All the pieces included in this monumental collection are based in folk tunes from several Eastern countries. The form of each duo is usually very simple, assuming the spontaneity and lack of structural complexity of the original folk songs. However, the folkloric character of these duos is not due exclusively to the use of modal folk songs. Irregular rhythm patterns, percussive effects, syncopation, drones in double stops and many other techniques contribute to an evocative and extroverted character.

Enrico Onofri and Lina Tur Bonet – both especially known as Baroque violinists – perform the duos playing on historical instruments, meaning violins set with early 20th-century strings. The combination of gut and steel strings produces a special sound and mix of the violins, influencing bow strokes and use of vibrato.