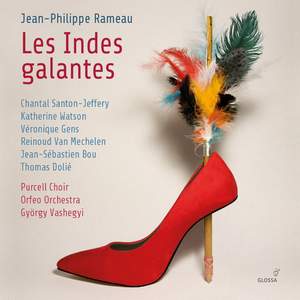 Vashegyi gets wonderful singing and playing from his Hungarian forces…The earthquake is vivid in the extreme, and so is the tempest…The singers, some of whom have appeared with Vashegyi before,... — Gramophone Magazine, June 2019 More…

Act I: Soleil, on a détruit tes superbes asiles

With Les Indes galantes by Jean-Philippe Rameau, György Vashegyi – along with his Orfeo Orchestra and Purcell Choir – makes a further dazzling addition to their Glossa series of French dramatic masterpieces from the Baroque and in the company of a luxurious line-up of vocal soloists.

The version of this ballet heroïque – supplied with an anti-colonial, anti-clerical manifesto by librettist Louis Fuzelier – selected by Vashegyi is the 1761 revision, a mere decade or so before the irruption onto the Parisian musical scene of the likes of Gluck and Grétry.

Rameau’s score had undergone frequent adjustments and improvements since its première a quarter of a century earlier and the performing edition for this recording, prepared for the Rameau Opera omnia by Sylvie Bouissou (who also provides a booklet essay here), offers a vision of this work which is more theatrical, fluid and concise than hitherto.

Vashegyi gets wonderful singing and playing from his Hungarian forces…The earthquake is vivid in the extreme, and so is the tempest…The singers, some of whom have appeared with Vashegyi before, are all one could desire… Apart from some overenthusiastic timpani rolls, the whole thing – performance and recording – is beautifully done.

There are excellent reasons for investigating this Glossa set, not the least of which is Vashegyi’s thoroughly idiomatic direction…Then there is the splendid quality of his cast…If only because he appears in all three entrées, star billing on this occasion must go to Reinoud Van Mechelen, now very much the go-to tenor in this repertoire…The loveliest singing comes from Katherine Watson’s pellucid and sensitive Émilie in ‘Le Turc’.

The colourful variety of Rameau’s music never ceases to delight, and if this account is rather more hard-edged and bumptious than its sweeter French competitors, it carries the listener along...the final grand Chaconne sweeps all before it.