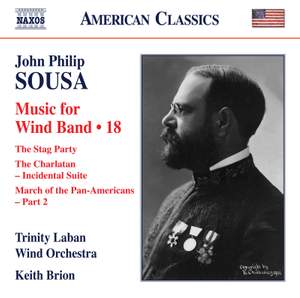 Sousa: Among my Souvenirs

II. The Faithless Knight and the Philosophic Maid

No. 22, United States of America

Spanning over 40 years of composition, Volume 18 reveals Sousa to be a master of operetta and the ‘humoresque’ just as much as the marches for which he is still revered the world over. Stag Party depicts a students’ night out via a string of imperishable popular melodies, while Among My Souvenirs sees the song lengthened into a vivid narrative ‘sketch’. There is also the Incidental Suite from The Charlatan, one of his best-known operettas, and March of the Pan- Americans, Part 2, the national anthem spectacular (Part 1 can be heard on 8559811).