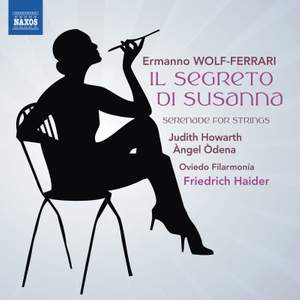 ...a lively finale, everything excellently played by the Oviedo Filarmonia. At Naxos’ affordable price no one should be disappointed with this issue. — MusicWeb International, May 2019 More…

Ermanno Wolf-Ferrari’s prolific early career succeeded in launching a fundamental renewal of opera buffa, offering a clear alternative to the dominance of Wagner and Puccini, while his Venetian upbringing inspired a songlike and lyrical style. With its subtle orchestration and vivacious Mediterranean charm, Il segreto di Susanna (’Susanna’s Secret’) is a magical comic opera that became a box office success in its day and remains one of Wolf-Ferrari’s most frequently performed works. The early Serenade reveals his innate gift for inspired melody, expressing both carefree bliss and bitter melancholy.

...a lively finale, everything excellently played by the Oviedo Filarmonia. At Naxos’ affordable price no one should be disappointed with this issue.

As one of the composer’s leading champions Friedrich Haider is completely at home with this score, and he make sure the Oviedo Filarmonía maintain a textbook balance of affection and wit…Howarth is in gentle voice as Susanna, resisting over-singing and creating a firm character, sweet but not saccharine.