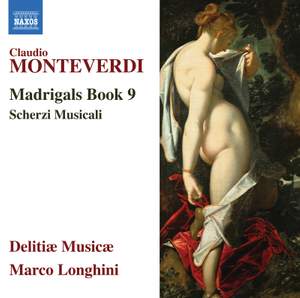 A fine culmination of Delitiæ Musicæ’s complete cycle of the Monteverdi madrigals. — MusicWeb International, May 2019

Monteverdi’s Ninth Book of Madrigals, published posthumously, and the 1632 Scherzi musicali (‘Musical Jokes’) are thematically linked by the recurring theme of war for the sake of love. Prefaced with a Sinfonia by Biagio Marini and featuring one of Monteverdi’s towering masterpieces, Zefiro torna, the Ninth Book comprises the few remaining late madrigals, a number of canzonette, as well as works with the same titles and verses from the earlier Eighth Book, here performed in completely different musical settings. Recorded complete, and in historically informed fashion, this is the final volume in the series. Italian early music ensemble Delitiae Musicae was established in 1992. The ensemble has been making recordings for over 20 years, and significant projects include Verdelot’s Missa Philomena praevia, and four widely acclaimed albums dedicated to masses of Palestrina that were awarded the Choc du disque and the 9 de Repertoire in France.

A fine culmination of Delitiæ Musicæ’s complete cycle of the Monteverdi madrigals.