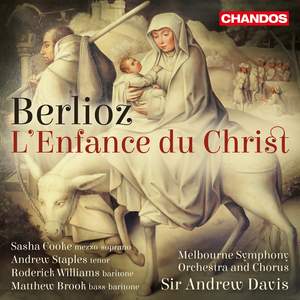 All the soloists are excellent, and thoughtful casting among the four baritones and bass-baritones has allotted the Israelite father to Matthew Brook, who brings just that touch of extra warmth... — BBC Music Magazine, May 2019, 5 out of 5 stars More…

Berlioz wrote his own text for L’Enfance du Christ, which he composed in 1853 and 1854. It was first performed at the Salle Herz, Paris on 10 December 1854, with Berlioz conducting. Berlioz was not religious as an adult but remained all his life susceptible to the beauty of the religious music that had enraptured him as a child, he described this work as a Trilogie sacrée. Sir Andrew Davis conducts the Melbourne Symphony Orchestra and MSO Chorus and an outstanding team of soloists in this Surround Sound SACD recording.

All the soloists are excellent, and thoughtful casting among the four baritones and bass-baritones has allotted the Israelite father to Matthew Brook, who brings just that touch of extra warmth to the role. Chorus and orchestra add further lustre to this superb enterprise, in which Andrew Davis’s love for the music shines through in every bar.

Sasha Cooke makes a radiant Mary opposite Roderick Williams’s tenderly solicitous Joseph…The Melbourne Symphony, meanwhile, sound very warm and plush, perhaps a bit too much so for some tastes in this work, but their playing is beautifully articulated and detailed. The set’s principal strength, however, lies in the choral singing, which is superb throughout in its clarity, balance and dynamic control.

He is alive to the orchestral colours, his chorus is good, and Andrew Staples is an eloquent Narrator, Sasha Cooke a lovely Marie, Roderick Williams a fine Joseph and Matthew Brook a powerful Herod

This magnificent release constitutes the finest and most consistently outstanding recording of Berlioz’s great choral masterpiece ever issued.