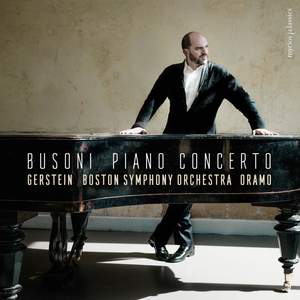 Gerstein and Oramo are impressive in their focus throughout the work’s opening movement, and the whirl forwards towards its close has a tremendous power to it…As [the slow movement] progresses,... — Gramophone Magazine, March 2019 More…

The pianist talks to Katherine about his recording of the Italian composer’s gargantuan Piano Concerto of 1904, released this week on Myrios with the Boston Symphony Orchestra and Sakari Oramo.

“This performance of Busoni’s Piano Concerto is as superhuman as it is meant to be.” – Alfred Brendel

Once a towering inspirational figure in the musical life of Berlin, later a crucial influence on musicians as diverse as Sibelius, Varèse, Schoenberg and Weill, Ferruccio Busoni is now being rediscovered by a new generation of performers and listeners.

Kurt Weill wrote: “Ferruccio Busoni has been called the last Renaissance man. It is strange enough that such a phenomenon appeared in our time. We are bound to think of Leonardo. In him also we find that comprehensive spirituality which strives to open up all attainable spheres. Such individuals are immortal not only through their work but through the radiation of their personality, through the gradual influence of their humanity.”

Busoni’s sui generis five-movement Piano Concerto is a work that bears comparison to Liszt’s Faust Symphony and Mahler’s Eighth. This revelatory new recording by pianist Kirill Gerstein with the Boston Symphony Orchestra and the men of the Tanglewood Festival Chorus conducted by Sakari Oramo is a landmark in the wider acclamation of a singular genius who mapped a sublime 20th century alternative to the modernist revolt of Stravinsky and Schoenberg.

Gerstein and Oramo are impressive in their focus throughout the work’s opening movement, and the whirl forwards towards its close has a tremendous power to it…As [the slow movement] progresses, Oramo reveals subtleties in Busoni’s scoring that I’d never heard before…The moment where the men’s voices creep in…has the sense of arrival, coupled with sublime beauty that is crucial…Anyone who loves the Busoni Concerto will want to add this to their shelves.

The sprawling score gets a virtuosic and gripping account from Gerstein, Oramo and the Bostonians. Gerstein manifestly has the measure of the solo part and his partnership with Oramo and the orchestra is palpable throughout. In a superbly clear recording, Oramo and the engineers bring out all the subtle touches and nuances of Busoni’s excellent orchestration. Conductor and soloist shape the transitions and structure perfectly.

He rides the work’s sometimes preposterous waves with subtlety and unflagging stamina, strongly accompanied by an electrically charged Boston Symphony Orchestra...the genuine spark of a live recording is here. So is enthusiastic applause from an audience clearly happy to bask in Busoni’s endearing monster, exquisitely poised between the ridiculous and the sublime.

Gerstein’s new live version is pretty exceptional, largely because he's so well partnered with Sakari Oramo's responsive Boston Symphony players. Trombones and tuba have plenty of impact, and the softer, slower moments are impressive...Documentation is exemplary: an outstanding recording of an entertaining, mind-bending work.