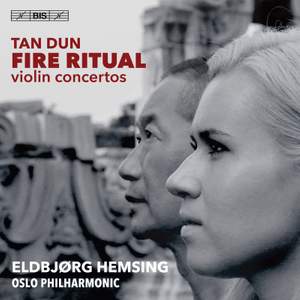 This excellent disc of violin concertos showcases Dun’s dexterity and imagination in writing for the instrument and features radiant and sophisticated performances from the violinist Eldbjørg... — BBC Music Magazine, May 2019, 4 out of 5 stars More…

IIa. A Dream Out of Peking Opera. Dolce molto

IIb. A Dream Out of Peking Opera. Andante

IIc. A Dream Out of Peking Opera. Adagio - Allegro

Fire Ritual, the concerto that lends its name to the present disc, was composed with Hemsing in mind. With it Tan Dun has created a musical ceremony for the victims of war, building on four themes: Cruel Wars, Innocent People, Mantras of the Heavenly Birds and Eternity. The concerto was premièred in September 2018 by Hemsing and the Oslo Philharmonic, conducted by the composer. For Eldbjørg Hemsing, Tan Dun has also created the concerto that opens the disc, Rhapsody and Fantasia, based on earlier works. Both works reflect the composer’s memories of growing up barefoot in the countryside, and his later experiences of bringing together the shamanistic and spiritual world of his childhood with the discipline and philosophy of Peking Opera. Or in the composers own words: ‘a reflection of those early memories of my youth, but through the lens of my current musical soundscape’.

This excellent disc of violin concertos showcases Dun’s dexterity and imagination in writing for the instrument and features radiant and sophisticated performances from the violinist Eldbjørg Hemsing…[In Rhapsody and Fantasia] Dun explores every inch of the solo violin with a depth of imagination that calls to mind Berg’s groundbreaking concerto…[Fire Ritual] blends the fierce with the meditative, and is performed with integrity and precision by Hemsing to complete this fine disc.

While some of Tan Dun’s ideas may seem rather overextended at times…what comes across most powerfully here is the dynamic three-way synergetic split between Tan Dun as conductor, Eldbjørg Hemsing’s striking characterisation of the solo violin’s material, and the sheer force and power of the Oslo Philharmonic Orchestra. Recommended.

Eldbjørg Hemsing shows a powerful affinity for this very visual, symbolic music, while the BIS SACD sound is nothing short of magnificent.

Dun casts his stylistic net wide in these two East-meets-West concertos (indeed both scores veer into ‘everything but the kitchen sink’ territory in places), and their language is immediately accessible and attractive; highlights include the berceuse-like interlude of ‘Rock the Violin in Rhapsody’, where the soft-focus cinematic atmosphere is undercut by unsettling orchestral glissandi, and the high-energy sparring between marimba and violin in the opening track.