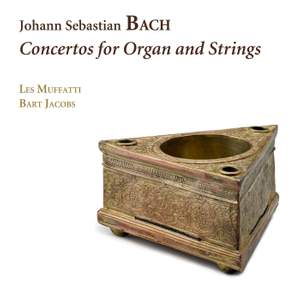 Bach may actually have known the Thomas Organ in the Church of Our Lady and St Leodagar, Bornem and Jacobs makes full use of its transmissions, letting loose his creativity and flair for colour... — BBC Music Magazine, May 2019, 4 out of 5 stars More…

Although we know of at least five concertos J.S. Bach wrote for solo organ we have no surviving Bach organ concertos with orchestral accompaniment. Contrast this with the 200+ cantatas: of these, 18 feature organ obbligato, which Bach uses as a solo instrument in arias, choral sections and sinfonias. The most obviously conspicuous date to 1726. In May to November of that year, Bach composed six cantatas which assign a prominent solo role to the organ. Most of these are reworkings of movements of lost violin and oboe concertos written in Bach’s time at Weimar and Köthen. Why Bach wrote such a number of obbligato organ cantatas in such a short period remains unknown. One possible explanation may lie in Dresden, where Bach had given a concert on the new Silbermann organ in the Sophienkirche in 1725. Some scholars think that, in addition to other organ works, he also performed organ concertos, or at least a few earlier versions of the sinfonias, with obbligato organ and strings in order to show off the organ. From the cantatas mentioned above, along with the related violin and harpsichord concertos, it is perfectly possible to reconstruct a number of three-movement organ concertos of this type. By using this method, we hope to bring some of the music which Bach may have performed in Dresden in 1725 back to life on this CD.

Bach may actually have known the Thomas Organ in the Church of Our Lady and St Leodagar, Bornem and Jacobs makes full use of its transmissions, letting loose his creativity and flair for colour across an array of stop combinations…If I yearned for greater whimsy, dynamic, or rhetorical variation from the strings, especially in robust ritornellos, these are certainly energetic and precise performances.

Once over the shock of hearing familiar music in very different circumstances, the performances are thoroughly enjoyable and rather convincing. There is rarely a bar’s rest in Jacobs’s organ parts, yet he deftly guides us through some of Bach’s finest moments, ably propelled by intelligent and energetic playing from Les Muffatti.

These performances are irresistible, the silvery sounds of the solo instrument delighting the ear, the strings thrilling and warm-toned.