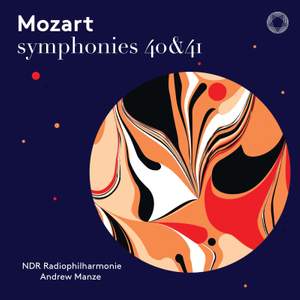 For someone who had such a long career as a period-instrument violinist, Manze’s interpretations with the NDR Radiophilharmonie (of which he is now principal conductor) are surprisingly Romantic... — BBC Music Magazine, May 2019, 5 out of 5 stars More…

Considered to be the highest triumph of instrumental composition in his own day, Mozart’s final symphonies continue to sweep audiences away. From the famous G-minor opening movement of the 40th symphony that cuts straight to the chase to the unprecedented complexity of the 41st symphony’s majestic finale, Mozart displays his vivid melodic invention as well as the maturity of his “old” musical soul. Even if his untimely death came unexpectedly, these two symphonies fill the listener with a sense of culmination, and may be seen as a sublime conclusion of both Mozart’s musical development and of the eighteenth-century symphony in general. These extraordinary works are performed here by the NDR Radiophilharmonie and Andrew Manze, and will be followed by a recording of Mozart’s 38th and 39th symphonies. With their first Mozart album, conductor and orchestra extend their successful PENTATONE discography that already contains the complete symphonies of Mendelssohn, crowned with a 2017 Jahrespreis der deutschen Schallplattenkritik.

For someone who had such a long career as a period-instrument violinist, Manze’s interpretations with the NDR Radiophilharmonie (of which he is now principal conductor) are surprisingly Romantic – and none the worse for that. To make the two most famous among all 18th-century symphonies sound so fresh is no mean feat. I enjoyed these performances immensely.

The NDR Radiophilharmonie is anything but plush. The orchestra’s signature sound is neither rich velour nor the hard wood of self-denial, just forthright and lightly padded at best. Manze embraces the final symphony’s theatricality and offers an opening Allegro vivace of churning drama, color, and excitement. All in all, this is a remarkable “Jupiter.”

Given his long career as an exponent of historical performance practice, Andrew Manze comes at this music as if from within, displaying a natural sensitivity to effect and Affekt. Speeds are judiciously chosen and are never outlandish: you will have to search elsewhere for performances that motor through these symphonies with vim and virtuoso vigour…No fireworks, just music-making of the highest standard, that you’d never guess was taken from concert performances.

This disc is so outstanding, and Manze such a fine musician, that I was not ready to find him subscribing to the fashion for fast Mozart minuets…Otherwise...I wanted for nothing and was stirred by these thrilling performances — Mozart on the heights.