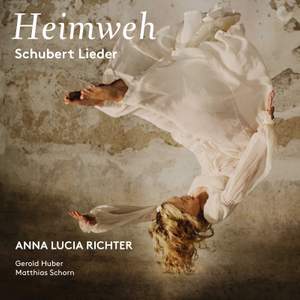 Richter is still early in her career, yet demonstrates astonishing versatility, insight and intelligence in this programme of Schubert songs. Gerold Huber’s extensive experience as an accompanist... — BBC Music Magazine, May 2019, 5 out of 5 stars More…

On her PENTATONE debut album, young German star soprano Anna Lucia Richter explores the heart-wrenching, timeless and universal feeling of Heimweh (homesickness) through a collection of extraordinary Schubert songs. Richter approaches the notion of Heimweh from several perspectives: from that of queens, young girls and shepherds to that of soldiers, dwarfs and gravediggers. The repertoire consists of the original, German-language version of Ave Maria, three Mignon songs (Nur wer die Sehnsucht kennt, Heiss micht nicht reden and So lasst mich scheinen), the sinister Der Zwerg, the expansive flower ballad Viola and many others. Richter is accompanied by pianist Gerold Huber, with whom she has formed a congenial Lieder tandem in the last years. They are joined by clarinettist Matthias Schorn on the final song of the program, the quasi concert aria Der Hirt auf dem Felsen.

Richter is still early in her career, yet demonstrates astonishing versatility, insight and intelligence in this programme of Schubert songs. Gerold Huber’s extensive experience as an accompanist is revealed as he draws the tenderest sounds from his piano without ever descending into mawkish exaggeration. Both artists know how to stretch time, bearing us expertly on the ebb and flow of Schubert’s music.

This is an accomplished and fresh recital from Richter, together with a supportive and effective accompaniment from Gerold Huber. Her lyric soprano easily manages the demands of these emotive songs, including a bit of steeliness when the occasion calls for it. The sound is clean and clear. Recommended for all those that are interested a fresher approach to these mostly oft-recorded songs of Schubert.

Richter’s pure, vernal soprano, care for words and supple, expressive phrasing are well-nigh ideal…Der Zwerg and Totengräbers Heimweh are anything but natural territory for a light lyric soprano. Yet in both songs her musical intelligence and dramatic use of the text go far to compensating for a lack of tonal depth. A delectable recital from a young soprano whose combination of vocal freshness and unforced expressiveness make her a natural in Schubert.