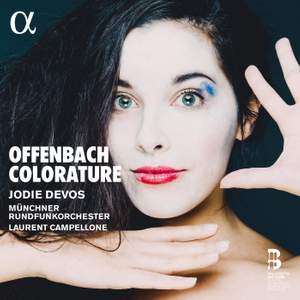 This is a marriage made in musical heaven with the young Dutch soprano Jodie Devos reminding us just how gifted Jacques Offenbach was as a composer…She’s a gravity-defying coloratura soprano... — BBC Music Magazine, May 2019, 5 out of 5 stars More…

Soprano Jodie Devos, who has signed with Alpha for several recordings, here pays homage to Offenbach, whose bicentenary of his birth is celebrated in 2019. This programme shows Offenbach’s fascination with the vocal fireworks of coloratura divas. This kind of ‘lyric coloratura’ or ‘soprano leggero’ voice runs like a thread through most of the composer’s oeuvre, from his first pieces for two or three soloists to those grand frescoes of his maturity, La Vie parisienne, Robinson Crusoé, and Orphée aux Enfers. The coloratura soprano also adorns Offenbach’s less frivolous operettas (such as Fantasio), as well as his only serious opera – Les Contes d’Hoffmann – in which the role of the doll (with only one aria, but what an aria!) is among the most famous in the entire French repertoire. Concocted collaboratively with Alexandre Dratwicki and the Palazzetto Bru Zane, this recorded programme – tailor-made for Jodie Devos – presents innumerable rarities from Mesdames de la Halle, Boule-de-Neige,Un mari à la porte, Le Roi Carotte, Le Voyage dans la lune, and Vert-Vert. In the famous Barcarolle "Belle nuit, Ô nuit d'amour", she is joined by up-and coming mezzo-soprano Adèle Charvet.

This is a marriage made in musical heaven with the young Dutch soprano Jodie Devos reminding us just how gifted Jacques Offenbach was as a composer…She’s a gravity-defying coloratura soprano who would have thrilled the composer; and she’s certainly not the proverbial canary…Metaphorically, you’re on your feet before Devos is effortlessly stretching up to her final top notes.

The main thing to say about Devos – and her thoroughly idiomatic partner-in-frolic, Laurent Campellone – is that she (and this is a huge compliment) delivers all that is required of her, and more, with the apparent ease of one who knows how important it is to conceal the difficulty. The real kicker with this album is the way in which number after number springs its surprises. The vocal pyrotechnics are artfully designed to make one’s jaw hit the floor.

In this centenary tribute the young Belgian soprano tackles repertoire that suits her well. Although we’re in a studio rather than a theatre, she frequently acts as well as she sings…Her ornately artificial version [of the Doll Song] feels just right.

'A few ‘Ah’s! That’s all I need!’ sings Devos as La Corilla, the cynical coloratura-queen in Vert-Vert as she simultaneously mocks and indulges her audience’s appetite for flashy vocal fireworks – and whilst this young Belgian soprano certainly entrances and thrills with the wordless roulades of the Valse-tyrolienne from Un mari à la porte and the Doll Song from Hoffmann, she’s no slouch with text either, bringing real pathos to arias from Le roi carotte and Fantasio in particular.

Her high soprano is brightly-hued, with a surprisingly strong lower register, and she relishes the coloratura as she dispatches numbers from Orphée aux Enfers and Les Contes d’Hoffmann, and a plethora of lesser-known pieces. Laurent Campellone conducts the Munich Radio Orchestra with appropriate brio, keeping rhythms springy and textures light. The whole enterprise almost requires a health warning as you will be afflicted with serious earworm for days. In fact, make that weeks.