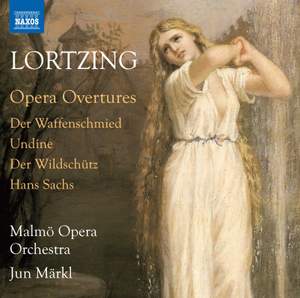 Jun Märkl and the Malmö Opera House Orchestra give good readings of the pieces, all lovingly played. — MusicWeb International, March 2019

For 150 years Albert Lortzing was, after Mozart and Verdi, the most performed composer on German stages. He was a multifaceted man of the theatre who wrote his own libretti, and his works follow in the tradition of Mozart and Weber but explore a variety of subjects, from romantic fairy tales to heroic calls for political freedom, which inevitably led to bans on performance. His opera overtures reflect the liveliness of his imagination and orchestration, and the exceptionally tuneful nature of his writing, as the music traverses imposing grandeur and lighter motifs alike.

Jun Märkl and the Malmö Opera House Orchestra give good readings of the pieces, all lovingly played.