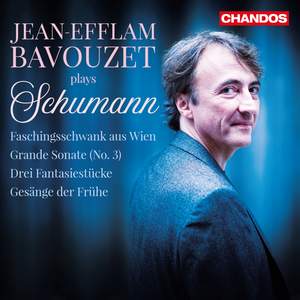 Bavouzet establishes his credentials immediately with a gripping account of Horowitz’s ‘edition’ of the Third Sonata, which climaxes in a moto perpetuo finale that the Frenchman somehow manages... — BBC Music Magazine, April 2019, 5 out of 5 stars More…

Following his recent acclaimed recordings of Haydn and Beethoven Sonatas, Jean-Efflam Bavouzet turns from the Classical to the Romantic era, and the works of Schumann. The programme is built around the Grand Sonata (no.3). This impressive, large-scale work was originally composed in 1834, later revised in 1853 and eventually premiered (6 years after the composer’s death) by Schumann’s young protégé Johannes Brahms. Jean-Efflam first discovered the work though a recording by Vladimir Horovitz in the 1980s, and got to play it to and discuss the work with Horowitz in Paris in 1985. Like Horovitz before him, Jean-Efflam combines elements from both the original and revised versions of the work on this recording. Bavouzet has chosen to couple this with another early work – the “Faschinsschwank aus Wein” – and then the much later work the “Drei Fantasiestücke”. He closes with the 'Gesange der Frühe' which were among the last compositions that Schumann wrote before his attempted suicide and incarceration in February 1854. As always with Jean-Efflam Bavouzet’s albums, the booklet features an insightful personal note by the performer.

Bavouzet establishes his credentials immediately with a gripping account of Horowitz’s ‘edition’ of the Third Sonata, which climaxes in a moto perpetuo finale that the Frenchman somehow manages to inflect with washes of textural colour…without losing an urgent sense of forward momentum…Bavouzet brings [the later works] to life here with a radiant energy that utterly refutes the notion that Schumann’s creative powers were by now fast waning.

It’s all too easy for the sonata to sound so extreme that it becomes bitty, but Bavouzet gives it an overall sweep that is absolutely engaging…the Frenchman knows exactly what he is doing: the finale is a masterclass in precision and clarity, even at speed, its more lyrical writing brought fully alive.

The impassioned opening to the Third Sonata sets the stall for this outstanding Schumann recital. Faschingsschwank aus Wien has much life to it, Bavouzet relishing those sudden turns so characteristic of Schumann, contrasting with the splendidly enigmatic late Fantasiestücke Op 111. [Op. 133] Bavouzet’s tormented interpretation seems to strive constantly for an elusive, renewed vigour. Bavouzet, at the top of his game, remains a force to be reckoned with.