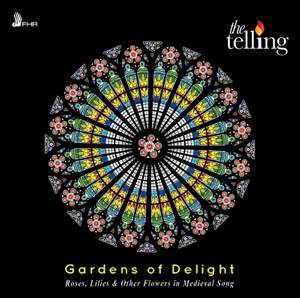 The three members of The Telling beguilingly entwine their Siren-like voices with the delicate plucked strings of the medieval harp…The vocal colours of the two principal singers complement each... — BBC Music Magazine, April 2019, 4 out of 5 stars (Performance) / 5 out of 5 stars (Recording) More…

anon.: Ther Is No Rose of Swych Vertu

Ther Is No Rose of Swych Virtu

'Gardens of Delight' is the first in a series of new recordings from the popular Medieval ensemble The Telling. This beautiful and interesting album features songs associated with flowers from the composers Guillaume de Machaut, Johannes Ciocnia, Antonio Zacara da Teramo and Hildegard of Bingen.

References to lilies and roses and many other flowers abound in both secular and sacred texts that were set to music from across European medieval repertoire from the 12th to the early 15th century. These two flowers in particular provided a rich symbolism: lilies represented purity and brightness in a sacred context and roses are often used to represent love, either secular or sacred. Both flowers were strongly associated with the Virgin Mary ? the lily particularly is associated with the annunciation, the biblical scene in which the Angel Gabriel appears to Mary to announce that she will give birth. Countless painting and altarpieces show Gabriel presenting a lily to Mary for example.

The Telling has a growing reputation for creating intimate, staged concerts to bring medieval music off the page and reach wider audiences. Formed in 2009, The Telling draw from a pool of leading musicians who perform for the Society of Strange & Ancient Instruments, I Fagiolini, Orchestra of the Age of Enlightenment, Carnival Band and The Dufay Collective

The three members of The Telling beguilingly entwine their Siren-like voices with the delicate plucked strings of the medieval harp…The vocal colours of the two principal singers complement each other well: Clare Norburn’s clear, silvery bell-like soprano just the foil for Ariane Prüssner’s resonant, wine-dark tones…There is an expressive ardour to these performances that is hard to resist.