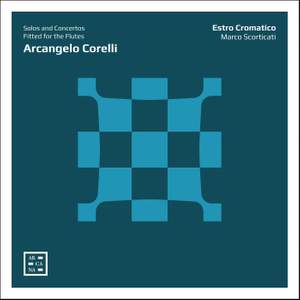 Arcangelo Corelli: Solos and Concertos Fitted for the Flutes

In early 18th-century England, the recorder was a popular instrument among music lovers, therefore – since the eminent Italian composer Arcangelo Corelli’s works made an enormous impression in the country – it was only a matter of time before numerous virtuoso recorder arrangements of his string works began to appear. Estro Cromatico leader Marco Scorticati (recorder) and his longstanding partner Davide Pozzi (harpsichord and organ) join forces with Evangelina Mascardi (archlute), Sara Campobasso (recorder), Michela Gardini (cello) and Pietro Pasquini (organ), to deliver a new rendition of this well-loved music, including two premiere recordings. Improvised ornamentation, as well as the multifaceted texture provided by diversified combinations of the continuo instruments, play a central role in the present interpretation, thus bringing Corelli's extraordinary music back to life; as Roger North wrote in 1710 «if music can be immortal, Corelli’s consorts will be so». Booklet notes include a short essay on Corelli and the recorder written by Dr. David Lasocki, recognized as one of the world’s leading scholars regarding woodwind instruments, particularly members of the flute family.