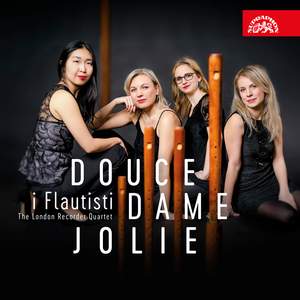 I Flautisti – The London Recorder Quartet

What can be encompassed in music within 60 minutes? Africa, Japan, Germany. London, Vienna,the Balkans ... Four virtuoso recorder players, i Frautisti, will guide you through this one-hour odyssey. Since their getting together in 2009 at the Royal College of Music in London, the female ensemble have given premieres of a number of pieces, directly written for them. The composers who have created music for them include such celebrities as Tarik O’Regan and Nathan Theodoulou. i Flautisti have appeared at renowned festivals and led master classes in the UK, Germany, Switzerland, Austria and the Czech Republic. Their live performances have also enchanted BBC Radio 3 and BBC Radio 4 listeners. The present recording serves to mark the ensemble’s 10th anniversary, featuring ten pieces that have earned them enthusiastic responses at concert venues. The album organically blends the Middle Ages and Baroque with torrential Balkan rhythms and the contemporary world. Yet you should not approach the modern tunes with trepidation: i Flautisti present (for the most part in world premiere) music that is beautiful, comprehensive, often catchy even. The ensemble’s great forte – also the common denominator of the recording – is an engrossing musicality, vivacity and passion. You will definitely want to take the hour-long trip again and again