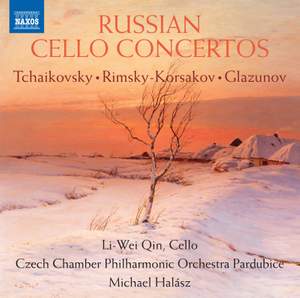 This is the kind of programming that Naxos excels at... Qin, has a disarming simplicity and elegance that prove gently beguiling — The Strad, April 2019

Tchaikovsky: Variations on a Rococo Theme, Op. 33b, TH 57b

Russian composers have made a significant contribution to the repertoire of music for cello and orchestra. Tchaikovsky’s Variations on a Rococo Theme, deftly scored for an 18th-century orchestra, reveals his admiration for Mozart whereas the Pezzo capriccioso is full of ripe charm. In the year of Tchaikovsky’s death, Rimsky-Korsakov composed the attractive Serenade, Op. 37 and his student, Glazunov, both absorbed and continued the great Romantic lineage with his own sonorous and beautiful Concerto ballata, the poignant Chant du ménestrel, and the Iberian evocations of the Sérénade espagnole from Deux Morceaux.

This is the kind of programming that Naxos excels at... Qin, has a disarming simplicity and elegance that prove gently beguiling