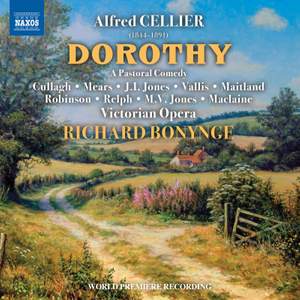 Cellier’s score is amiably put together if lacking the inventiveness of Sullivan or Edward German…I’d be surprised if the recording led to any major revivals, but it’s good to have such a capable... — BBC Music Magazine, April 2019, 3 out of 5 stars (Performance) / 4 out of 5 stars (Recording) More…

Act I: Lads and Lasses Round About

Act I: Be Wise in Time, Oh Phyllis

Act I: We're Sorry to Delay You

Act I: With Such a Dainty Dame

Act I: A Father's Pride and Joy

Act I: I Am the Sheriff's Faithful Man

Act I: You Swear to Be Good and True

Act I: Under the Pump

Act I: Now Take Your Seats

Act II: Though Born a Man

Act II: Contentment I Give You

Act II: Queen of My Heart

Act II: Are You Sure?

Act II: What Noise Was That

Act III: Dance of the Peasants

Act III: The Time Has Come

Act III: You Swore to Be Good and True

Alfred Cellier was a contemporary of Arthur Sullivan as a Chapel Royal chorister, and would later conduct several Gilbert and Sullivan productions. With its rural tale of disguise and romantic scheming, its jaunty tunes, lively characters and farcical comedy, Cellier’s light opera, Dorothy, has been almost entirely forgotten today. It had the longest run of any 19th-century piece of musical theatre, seeing off The Mikado and Ruddigore, and became such a popular hit in its day that the box office profits were able to fund the building of the Lyric Theatre on London’s Shaftesbury Avenue.

Cellier’s score is amiably put together if lacking the inventiveness of Sullivan or Edward German…I’d be surprised if the recording led to any major revivals, but it’s good to have such a capable performance available…Bonynge conducts with vivacity.

Cellier does a nice line in lilting ballads and waltz-songs; and, with Richard Bonynge at the helm of an orchestra that would have done any Victorian theatre proud, we can enjoy both the graceful swing of Cellier’s melodies and his luminous little touches of colour…You don’t expect or need heavyweight singing in this repertoire, though Majella Cullagh has richness to spare as Dorothy.

A work which still has the power to charm and delight after a century of neglect.

[Bonynge’s] relaxed tempos and delicate moulding of choral and instrumental textures – not least in the appealingly Smetana-esque ballet – convey winning affection if limited zest…Dorothy offers the teasing pleasures of a soft sherbet fountain rather than anything more intoxicating, but all hail Victorian Opera for reviving this gentle blast from England’s musical past.

Conducted by Richard Bonynge with efficiency... and neatly performed by a generally young cast.