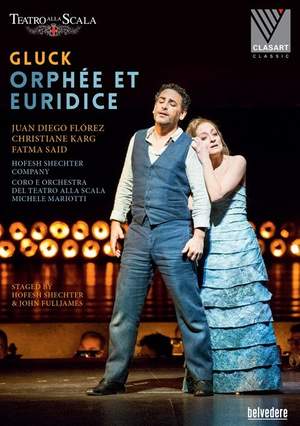 Flórez burns up the stage, vocally, and dramatically. His voice is Orphic: supple, strong, many-hued and profoundly expressive; his inner turmoil is gripping. Choreographer Hofesh Shechter is... — BBC Music Magazine, March 2019, 5 out of 5 stars (Performance) / 4 out of 5 stars (Recording) More…

Juan Diego Flórez dazzled audiences and critics alike when he played the virtuoso role of Orphée in La Scala’s first ever staging of Gluck’s opera in its French version: “Juan Diego Flórez delivered a lesson in style. His tone is darker and his projection more self-effacing than in the past, but class is permanent. His agility and legato are utterly thrilling. The ovations were never-ending.” (Corriere della sera) A production by Royal Opera House, Covent Garden, London Recorded live at Teatro alla Scala, Milan, March 2018

Flórez burns up the stage, vocally, and dramatically. His voice is Orphic: supple, strong, many-hued and profoundly expressive; his inner turmoil is gripping. Choreographer Hofesh Shechter is a poet himself…Despite its inferior set and costumes, this Orphée et Eurydice combines voice, dance and instruments brilliants, and in ways that only a DVD can capture.

I observe in Flórez’s Milan Orphée a degree of development since 2015 that deserves celebrating all on its own: one might now almost call it a display of total absorption in the music and the words…this Orphée [is] a true hero, not the moping misery he can sometimes seem to be. [Mariotti] gets the music to flow: in the unfolding of the Heavenly Fields there’s a relaxed radiance and an unforced beauty of orchestral playing and choral singing that carry their own considerable reward.