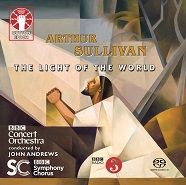 Sullivan: The Light of the World

This performance is close to ideal. All the soloists make their mark, and conductor John Andrews does an excellent job, bringing constant motion to the score and drawing refined playing from... — BBC Music Magazine, March 2019, 5 out of 5 stars More…

Sullivan, A: The Light of the World

Interview,  John Andrews on Arthur Sullivan's The Light of the World

The conductor talks to Katherine about the world premiere recording of Sullivan's 1873 oratorio on the life of Christ, which was released last month on Dutton.

Commissioned for and first produced at the Birmingham Musical Festival of 1873, The Light of the World is Arthur Sullivan’s great oratorio on the life of Christ. Although regularly performed during the composer’s lifetime, changing fashions gradually condemned the work to obscurity. Occasional revivals have failed to make the case for it, primarily because it was not understood that The Light of the World is essentially a dramatic work, rather than a purely religious one. When Dutton Epoch and the Sir Arthur Sullivan Society came to record the work, this new understanding enabled a completely different approach to be taken – the result is a vibrant performance by the BBC Symphony Chorus and the BBC Concert Orchestra conducted by John Andrews. They are supported by the Kinder Children’s Choir and a fine team of soloists: Natalya Romaniw and Eleanor Dennis (sopranos), Kitty Whately (contralto), Robert Murray (tenor), Ben McAteer (baritone) and Neal Davies (bass).

This performance is close to ideal. All the soloists make their mark, and conductor John Andrews does an excellent job, bringing constant motion to the score and drawing refined playing from the BBC Concert Orchestra and articulate singing from the BBC Symphony Chorus and the Kinder Children’s Choir.

No praise can be too high for the present big-hearted revival. John Andrews directs proceedings with the utmost care and infectious conviction, and elicits ideally fervent and polished results from his assembled choral and orchestral forces…The SACD sound is superb, possessing a most beguiling warmth and amplitude…Plaudits to everyone involved with this enterprising release.

It’s a rambling piece, and one can’t help thinking that Sullivan was right to cut it after early performances, but much of the solo writing is beautifully shaped and, as in all Sullivan, an easy lyricism pervades throughout.