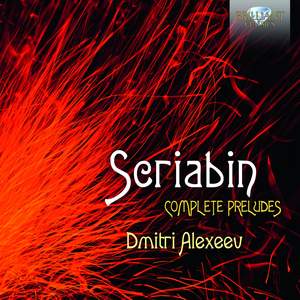 In this third instalment in his survey of Scriabin’s complete piano works, Alexeev’s temperamental affinity once again comes paired with sovereign command of colours and intonations (in the Russian... — Gramophone Magazine, March 2019 More…

No. 1. Prelude in C-Sharp Minor

No. 1 in D-Flat Major: Andante

No. 2 in F-Sharp Minor: Con stravaganza

No. 2 in F-Sharp Major: Vagamente

No. 4 in A-Flat Major: Ardito, bellicoso

No. 2 in F-Sharp Major: Maestoso, fiero

No. 4 in G Minor: Irato impetuoso

No. 1 in F-Sharp Major: Allegro

No. 3. Prelude in E-Flat Major

No. 1 in F-Sharp Major: Impetuoso fiero

No. 4 in C Major: Festivamente

No. 1. Prelude in E-Flat Major

The Complete Preludes constitutes another captivating milestone in Dmitri Alexeev’s ongoing project to record Scriabin’s entire oeuvre for the piano on Brilliant Classics, a cycle that already includes the complete Piano Sonatas (2-CD 94388) and Complete Études (94439).

The 90 preludes composed by Alexander Scriabin (1872–1915) span the entirety of the three periods into which his musical career is usually divided. His fastidious habit of indicating the date and location of compositions allows us to trace groups of roughly contemporary pieces. Consequently, it can be seen that around half of the preludes fall into the ‘first period’ (1888–1900), in which the composer’s music was heavily influenced by Frédéric Chopin’s work.

Scriabin’s music evolved over the course of his life, and in 1900, he completed the 2 Preludes Op.27. These compositions exorcised the spirit of Chopin which had hovered over their predecessors, therefore marking the end of the so-called ‘first period’. Whilst more harmonically adventurous, his ‘middle period’ works still mostly adhere to traditional functional tonality.

In the third period (1910–14) Scriabin composed his final works, the Preludes Op.74. Stable tonality and key signature disappear completely. However, Scriabin’s interest in symmetrical patterning is highly evident. They raise the tantalising question of where Scriabin might have taken 20th-century music had he not tragically died the following year.

Russian pianist Dmitri Alexeev is one of the world’s most highly regarded artists. His critically acclaimed recitals on the world’s leading concert stages and concerto appearances with the most prestigious orchestras have secured his position as one of ‘the most remarkable pianists of the day’ (Daily Telegraph).

In this third instalment in his survey of Scriabin’s complete piano works, Alexeev’s temperamental affinity once again comes paired with sovereign command of colours and intonations (in the Russian sense of musical eloquence). Giving the music its due quota of caprice and volatility, he never deviates into aggression or superficiality, conveying instead an overall impression of humane dignity and a powerful sense of journey.

“Dmitri Alexeev’s Scriabin cycle goes from strength to strength. I was impressed by his set of Études and now I have been completely blown away by this new set of the preludes. Alexeev seems the complete Scriabin pianist: he not only has the superb technique which is a necessity in these often very demanding pieces, he also knows how to shape them, how to clarify the complex textures with subtle voicing of the complex harmonies. His pedalling is fastidious, and he resists the temptation to drown the pieces in a wash of sound.