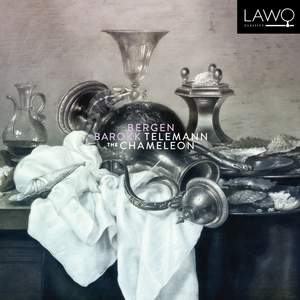 I can fully commend the accomplished playing of Bergen Barokk. Its playing is sympathetic and stylish, and the music is enlivened 0062y thoughtfully-articulated phrases and evident affection... — BBC Music Magazine, March 2019, 3 out of 5 stars 9Performance) / 4 out of 5 stars (Recording) More…

Telemann’s many sonatas for recorder and basso continuo, including those in conjunction with other instruments, can be found on many recordings and are probably known to many listeners with an interest in the Telemann oeuvre. This is why in this “recital” recording, we have gone a little off the beaten track and taken some liberties.

In “Carillion” (1) and in “Sonata B major” (34-37) the bass recorder is used, though it is not usually an instrument associated with solo work. It is, however, a variety of woodwind that Telemann was not unfamiliar with, as he used it in “Trauer Actus” (1724) and hints at it in the title “Bassoun ô Flaut. 4”, loosely translated as “bassoon flute”, playing an octave over the bassoon. Such “bassoon recorders” were also called “basset, “Flaut-doux-Basson”, or “flauto fagotto”. A considerable number of bass recorders from the best instrument makers are well-preserved, which is somewhat unusual as we very rarely find the instrument specified in musical notation (though with some exceptions in the form of Telemann, Pepusch, CPE Bach, and in an English version of Corelli-sonatas arranged for alto recorder and “fluto basso”). There is some indication that the instrument was used, for example, in opera and theatre music, though without being specified in the scores.

We have also chosen a less conventional solution for one of Telemann’s trio sonatas (13-16). The sonata was originally composed for recorder, treble viola da gamba and basso continuo. A basso continuo group consisted of two (e.g., harpsichord and cello) or more instruments. Based on a practice that became increasingly more common in Telemann’s time, we have realised the three voices in a compressed form, with myself playing the top voice while Hans Knut plays the bass with his left hand and second voice with his right. Notice here also that the first voice features a canon of the second voice!

We have also opted for a French Ouverture, originally for oboe and basso continuo (published in “Der Getreue Music-Meister”, 1728), preceding the Partita in G-minor (3-10) from “Kleine Cammer-Music” (1716). Telemann later released these partitas for orchestra and this is one of the rare examples of him recycling his own material. When he created the orchestral versions, he added a French overture. So we got the idea from the master himself.

“Kleine Cammer-Music” consists of six partitas, printed in score form. Telemann opens up the possibility for the solo parts to be played on the oboe, violin or flute, though the score can also easily be played solely on the harpsichord. This collection belongs to Telemann’s earliest published works and was very well-received.

Although Telemann’s works are often perceived to be highly idiomatic, we musicians experience that in many cases this idiomaticness also works on several instruments. For example, you can hear how 2 pieces from a fantasy for violin sound on the bassoon (11-12).

We have also allowed Johann Friedrich Fasch, who had a deep admiration for Telemann, to join the party. With a reverent nod to his role model, he has provided us with a bassoon sonata (29-32). Finally, I have taken the liberty to incorporate 2 pieces by Frenchman Jean Daniel Braun into one of Telemann’s flute fantasies, the result being an approximation of a classic suite in five movement (24-28).

I can fully commend the accomplished playing of Bergen Barokk. Its playing is sympathetic and stylish, and the music is enlivened 0062y thoughtfully-articulated phrases and evident affection for the music.